We could have been anywhere on the planet 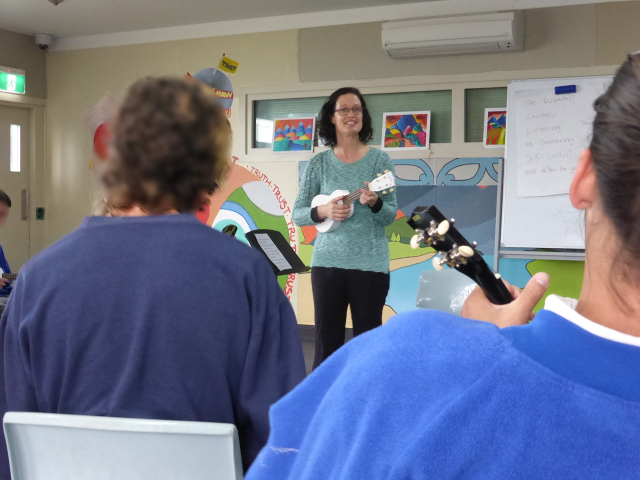 One of the pleasures of being a musician is experiencing moments of being touched by music. It is as if something dormant is awakened. Memories stirred. Worries forgotten. The present holds still.

It was like that last week for me when I was at Christchurch Men's Prison and had the privilege of performing alongside 12 young men in the Youth Unit. We were rehearsing a guitar piece in a hall, surrounded by walls, barbed wire, survellaince cameras, guards and security alarms. It was in the middle of a song, that I suddenly took a step back and saw a bigger picture. We had forgotten everything. The past. The future. We hung in the present. Singing and playing our hearts out. Connecting. Sharing.

Music is an incredble art form. It has no barriers. We could have been anywhere on the planet.

I hope it is not too long before we play again together. 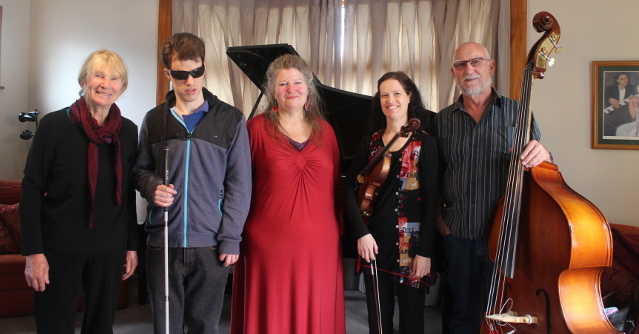 Working with different groups of people is always a creative and fun experience. Here I got to perform with members of Jazzmattaz, Hagley Jazz Course and the CSO at Peterborough library this weekend. We called ourselves Pentadjazz: Judi Smitheram (vocals), Mary Ruston (piano), Cathy Irons (violin), Jonathan Petty (piano) and Gerald Oliver (double bass).

Doing the Hagley Jazz and Improvisation Course this year has really strengthened my playing. I have learnt to breathe normally, practise my scales, listen carefully and then - let go! It has influenced the way I think about performing. In jazz, you are never entirely sure what will happen (yes, I do prepare and practise some passages ahead of time) but in the moment I need to be able to respond to what the others are doing, the feel of the music, what I have to say and my courage factor! It has taught me that sometimes we get so wound up when we learn classical music, that we prepare all sorts of stresses around the difficult passages. In the concert, we should simply respond to what we hear and...let go!

Muisc is something that continually fascinates me, I have an endless list of questions to myself in the practice room each day. What if I change this? What if I phrase something a different way? It amazes me how the hours can fly by when I am playing. My biggest musical goal at the moment is to become the music, be barely aware of what is happening around me or even playing itself, and just be totally absorbed in the beautiful sound world of the violin.

I have had a few projects to keep me practising and reaching for my goal - concerts from jazz duos to quartets, violin-piano recitals to string trios and orchestral concerts. I sincerely thank the musicians I have rubbed shoulders with this year. I have learnt something from each one of you. And to you, my audience, thank you too for sharing these magical moments with me.

A Moment in Violin Heaven

I had a once in a lifetime experience last weekend performing on an 18th century Guadagnini violin belonging to Sir Michael Hill. Together with Flavio Villani on piano, I was the first Kiwi violinist to play it in a recital in NZ. The instrument, made in Milan, Italy, in 1757, is in a flawless condition and will be loaned to the winner of this year's Michael Hill International Violin Competition for their return New Zealand/Australia tour. What an absolute privilege it was to play it!

The violin had been in storage and it took a while for its tone to reach its full sound. Once "awakened" it had an incredibly rich tone with immense projection. It was like having a new musical voice that could express a huge range of tone colours and nuances. I felt its servant as I practised and explored it, then at the performance later that night, we suddenly gelled and the violin came to life in my hands.

I knew it would be risky to perform on a "new-for-me" instrument after just one day's pracise, but life sometimes surprises us and I knew I would kick myself if I didn't give it a go. So I put my life and soul into the performance and played like every note was my last. And when the performance was over I felt like I had given a bit of myself away to the soul of this beautiful instrument.

I felt very honoured to be given a chance to play an instrument of this calibre and am grateful to Sir Michael Hill for giving me this once in a lifetime opportunity.